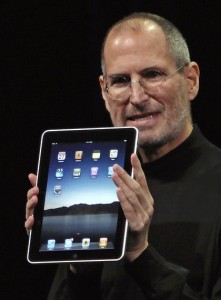 I was in the US last week, a few days after the release of Apple’s latest invention, the iPad. This was a happy, if expensive, coincidence since us Brits are not permitted to buy one until later this month. Although I now have my hands on the hardware, Apple will still not allow me to buy their iBooks or iWorks apps with my UK registered iTunes account, which is a little frustrating to say the least.

It has been quite hard to get to know the device properly in the four days since I handed over my Amex card to the overworked Apple Store employee in Santa Monica. One problem has been the constant interruptions from friends and passers-by. Whether it is the amazing buzz that Apple have created, or the wonderfully sexy design, but you cannot sit in a hotel lobby and simply use the device. You are in constant demonstration mode. I only wish that Apple paid a referral commission.

Another problem with getting to know the iPad is that, like its smaller predecessors, so much of the experience and functionality of the device is driven by the applications you install. Part of the fun of the last few days has been rediscovering favourite apps, reinvented for the new platform. One such is NetNewsWire, an RSS reader. The iPhone version is excellent, making browsing and reading news stories amazingly easy on such a small screened device. However, on the iPad, it makes it a wonderfully fluid and enjoyable experience. The dedicated media apps like the New York Times viewer are even better. The interesting thing is that I also have NetNewsWire for the Mac and the iPad version provides a superior experience. The combination of a touch interface and a decent sized screen that you can lay on your lap really works for media consumption.

It’s also great for watching video, looking at or showing off photos and reading books. I had a great opportunity to test this out on my eleven hour flight back from LA. The highly reflective screen can be problematic, but overall it is an almost ideal personal entertainment solution when travelling. I also have a Kindle and the backlit screen on iPad works much better on a flight. I will still be using my Kindle though; in bright sunshine or for handholding it wins out. The brilliant thing is that there is a Kindle app for the iPad, which means that I can mix and match, using each for what it is best at.

Ease of use is definitely a strong point. As Steve Jobs told us when announcing the device, anyone who owns an iPhone or iPod Touch already knows how to use it. But the familiarity is deceptive. The vastly larger screen real estate transforms the experience in a way which is both subtle and at the same time addictive. After using the iPad for a while, the previously wonderful iPhone user interface now feels horribly cramped and inelegant.

One advantage of the iPad that it is easy to underestimate at first is the social dimension. Sitting in a meeting or at home with a laptop in front of you is somehow a mildly anti-social thing to do. The screen in front of you acts as an barrier, sending subliminal but strong signals which distance you from others. It is the technological equivalent of reading the paper with it held up in front of your face. An iPad laid flat in front of you leaves you psychologically still part of the group.

It’s less good as a document creation tool. The on screen keyboard works really well and you can also attach a bluetooth keyboard, which helps when writing lots of text. I started writing this post on the iPad, using the WordPress app. I was managing fine, although the app seems to have a cut and paste bug at the moment, but I have to admit that I am now writing this on my laptop. Not only is it a better tool for the job, my iPad has been ‘borrowed’ by my son, who is now merrily killing Zombies on it. This is the iPad’s other great strong point, gaming. I also suspect that it will be the most profitable for Apple and the biggest drain on my own personal productivity!